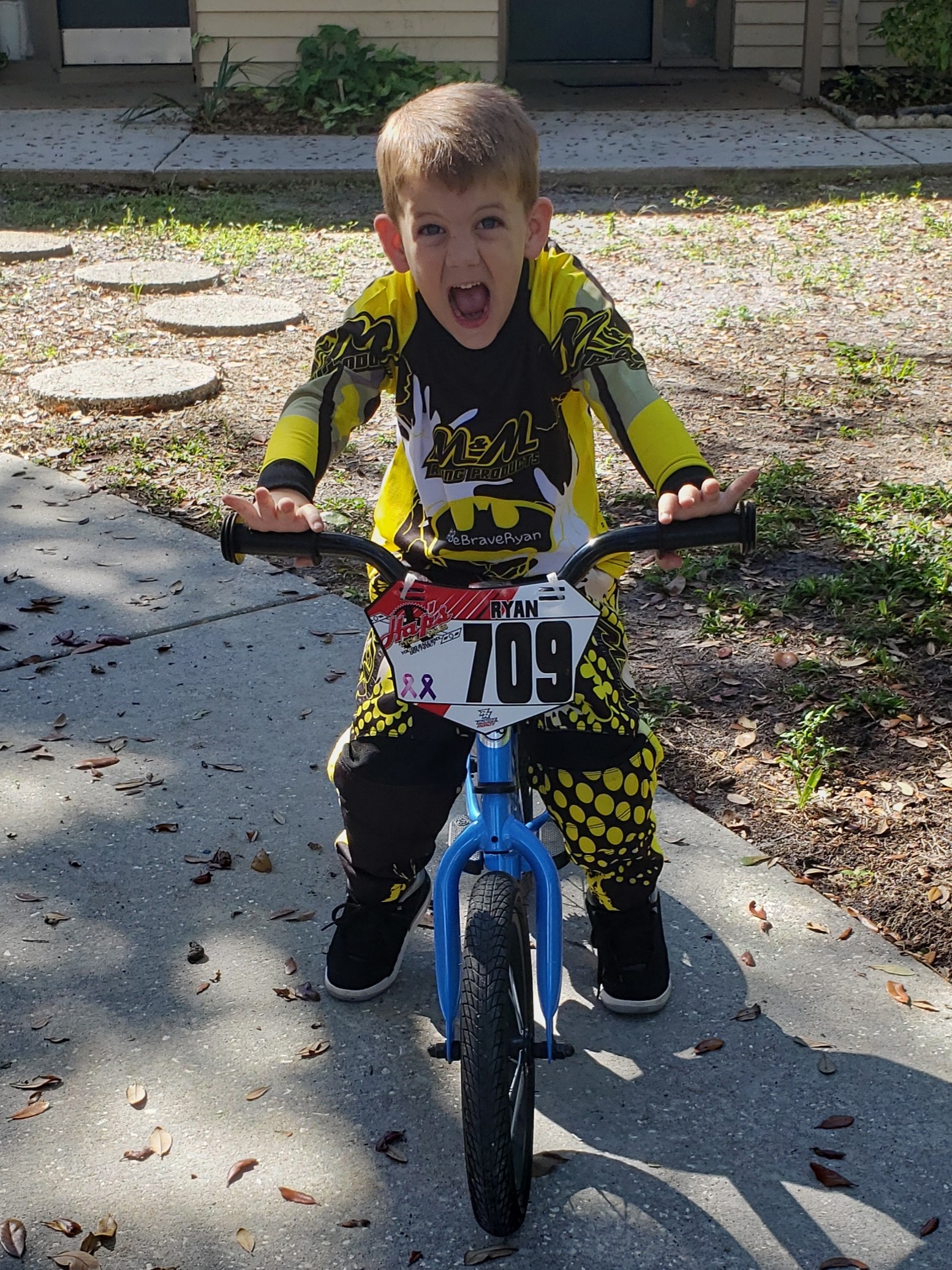 Ryan’s Story – A Boy and His Bike

When Ryan was six months old, his mother, Jen, had a feeling something wasn’t quite right. “He was growing, but his strength was not,” Jen reflects. With twenty years of medical experience under her belt, Jen went about trying to convince Ryan’s pediatrician that he needed extra attention. It wasn’t until he was fourteen months and was struggling to hit physical milestones that they finally got a consult with a physical therapist.

“I figured they would probably just give us some exercises and tell me what I needed to do to fix it. And then we’d carry on,” Jen remembers. That is not how it turned out. They were shocked to find out that his abdomen muscles never closed and he had no muscle tone in his core. And that was just the beginning.

When Ryan was just two years old, Jen found him unresponsive. They rushed him to the hospital where he would end up being for the next few months while doctors tried to figure out what was going on. On July 15th, 2017, Jen and her husband found out that their baby boy had Glycogen Storage Disease type 9a, a very rare genetic disorder. Ryan doesn’t process the enzyme to convert glucose into sugar from his liver, and if he goes longer than two to three hours without eating his blood sugar drops to nothing. In other words, they found out that day that they have a very sick little boy.

“It was a nightmare,” Ryan’s mom, Jen, recounts. At the time, they lived in Indiana, and they were running all over – from the Cleveland Clinic to Cincinnati Children’s Hospital – to try to find help for Ryan. When Jen lost her job on Christmas Eve, and the family lost the home they had just built, she decided to make a bold move. Jen turned to her husband and said, “I’m moving to Florida. Are you coming or staying?” To which her husband responded, “Well, I guess I don’t really have a choice.”

Jen and her family packed up and moved to Sarasota, Florida, where the warmer temperatures were a little easier on Ryan. They didn’t know it then, but this is where they would end up finding a little piece of joy amid their heartbreaking ordeal. 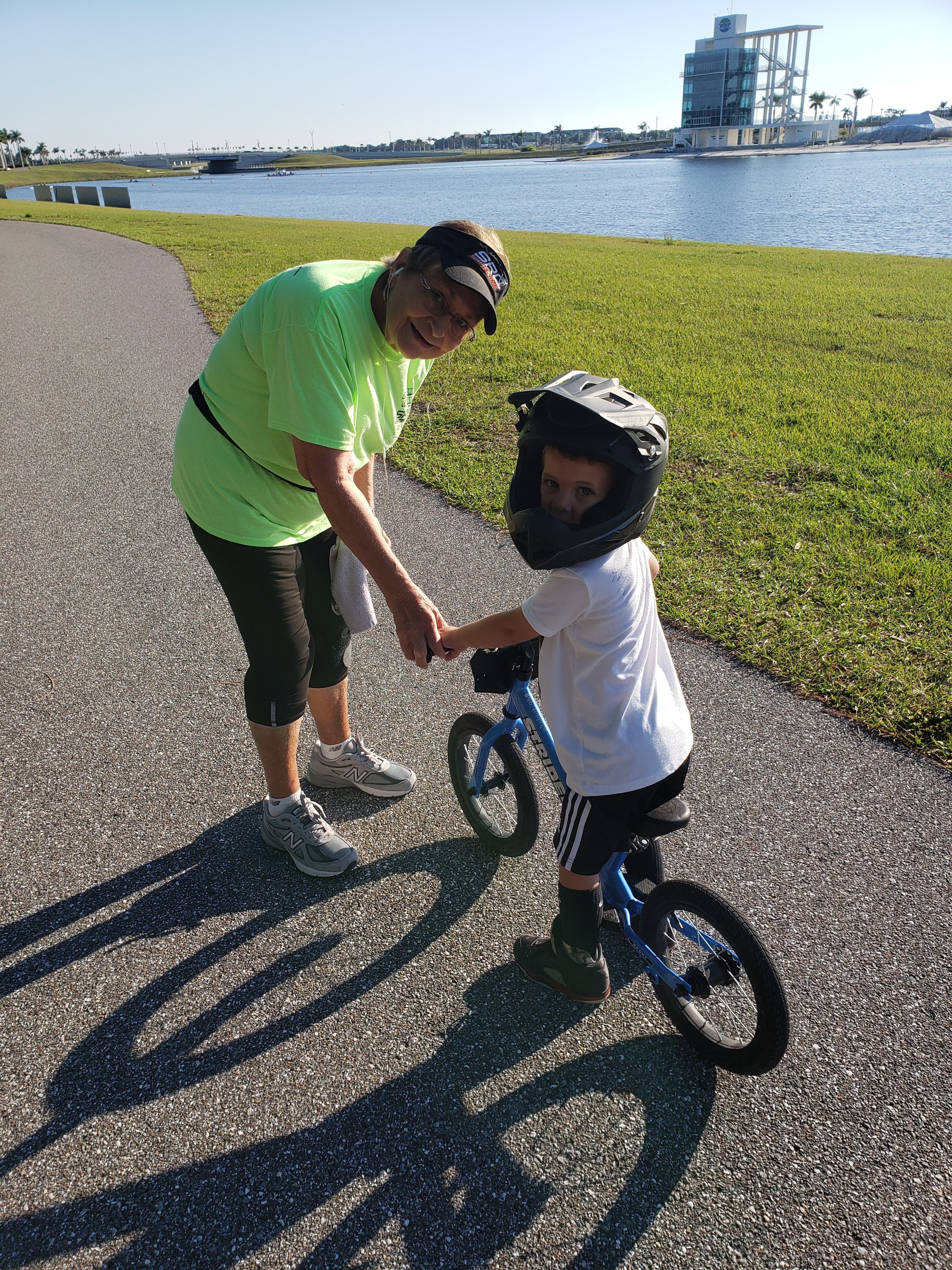 She got a Strider Bike out for Ryan to sit on, and, as Jen puts it, “it was pretty amazing because he just wanted to take off on that bike!”

There was a BMX track close to their new apartment in Florida. On Saturdays, Jen would put Ryan in his wheelchair, wheel him to the bleachers, and they would watch the riders. One particular Saturday, they noticed there was a Strider Bike Program, and went to inquire for their daughter who was six at the time. She had numerous ear infections and two sets of ear tubes growing up, which made it difficult for her to balance on her bike with training wheels.

On this fateful day, they met Erma Miller, who runs the Strider program at Sarasota BMX. While Jen’s daughter Olivia did get on a bike, Erma was very interested in what little Ryan could do.  Jen tried explaining that Ryan needed a wheelchair because he didn’t have much endurance and he had to carry a backpack with a pump for continuous feedings, so it wasn’t likely he could ride a Strider Bike. But, Erma was persistent! She got a Strider Bike out for Ryan to sit on, and, as Jen puts it, “it was pretty amazing because he just wanted to take off on that bike!” Erma marched into her office, came out with a Strider box, and told them to take it home. “And the rest is history,” Jen states.

Ryan was able to practice riding his Strider in their apartment, where he could stay nice and cool, and he practiced balancing and riding around. Next, they took him to the track and worked with him until he learned to go around the pump track. And just like that, he was riding with the other kids, his feeding backpack and all!

The BMX track organized a modified race for Ryan to participate in, but it didn’t take long before he decided he wanted to join his age group in a regular race. “He starts with them, and he gets last every time. But, you know what, the kid never stops,” Jen says with a proud laugh. 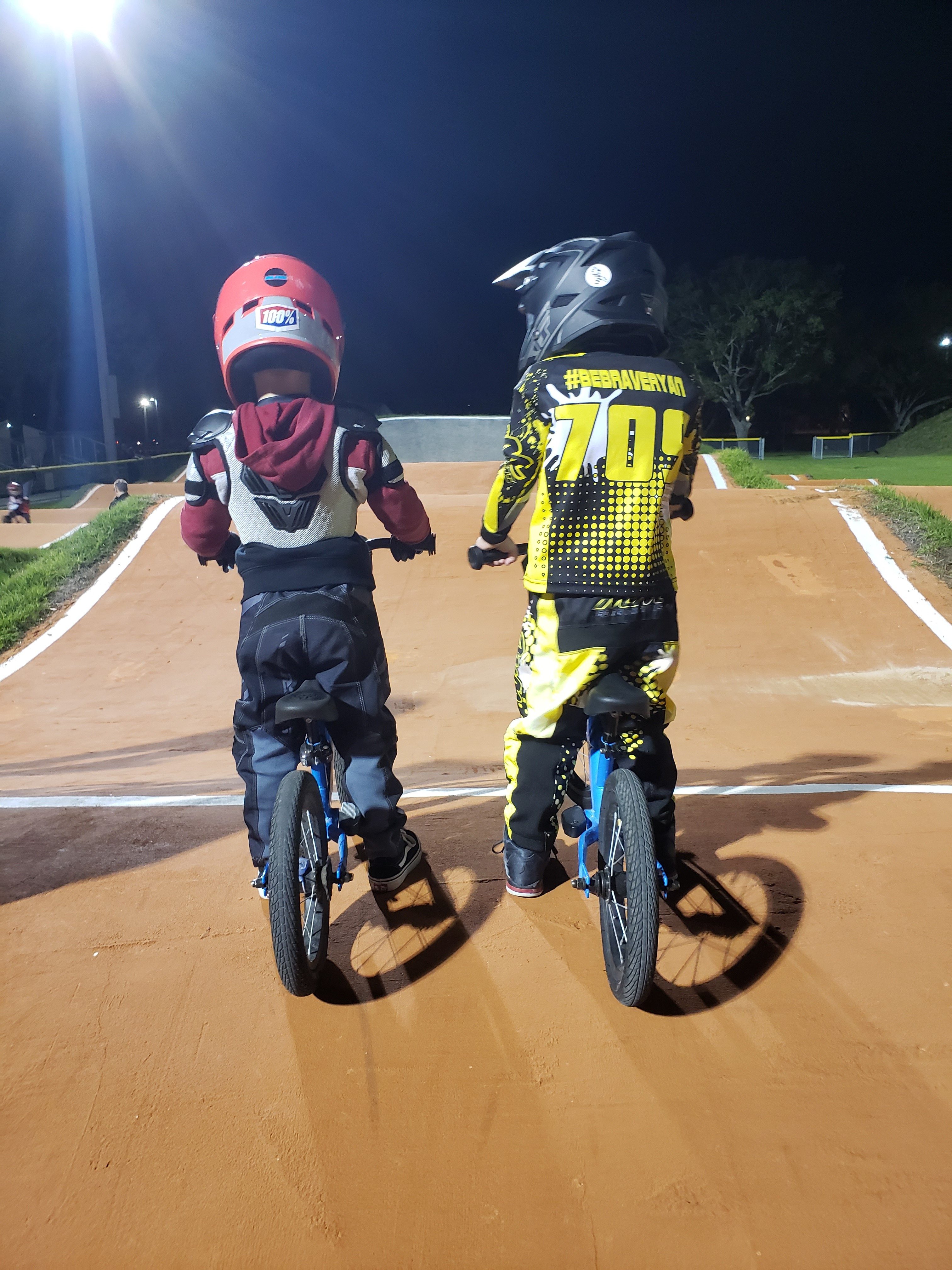 He has gained so much strength from riding his Strider Bike that he doesn’t need physical therapy anymore.

Little Ryan is now a fanatic. They go to the track as often as they can. He gets high five from friends and a community of people who cheer him on. He has gained so much strength from riding his Strider Bike that he doesn’t need physical therapy anymore. “I just take him to the track instead,” Jen explains. As for his wheelchair, he barely needs that either. Ryan’s mom, Jen, is blown away by how much stronger her still sick son is. In fact, when Strider sent them a 14x with a pedal conversion kit, Jen knew he was ready to pedal.

“It was like Christmas morning when the Strider 14x arrived. For both of us,” Jen recalls. They got Ryan geared up and went out to try his new pedal bike. He was reluctant at first, but Jen just knew he was ready, so she was persistent. “You can do it,” she repeated several times. So, Ryan started with feet on the ground and began striding just like he had done so many times before. “It was – stride, stride, pedal – and dude, he took off,” Jen recounts with great excitement.

Two years ago, in the hospitals in Indiana, if someone would have told Jen that her little guy would be riding a pedal bike, she would have told you, there’s no way. Now, she is a Strider Bikes believer! “Every chance I get, when I talk to my friends who have children with special needs, I’m like, dude, you have to get your kid a Strider,” she says.

Even with all the great improvements Ryan has shown, he is still a sick little boy. Last October there were openings in Connecticut with the world’s leading GSD doctor. They called Jen with 48 hours of receiving Ryan’s paperwork to inform her they had been accepted. “When I took him out there, the doctor said Ryan was one of the sickest kids he’d ever seen,” Jen recounts. The doctor apologized for not getting him in sooner, to which Jen responded, “we are here now.”

Ryan was put on lifesaving treatment. So far, it’s okay. But, Jen has a feeling it might not be a long term solution. “He’s doing okay for now. You know, I always tell people every day is a blessing,” Jen states. She can see the future a little easier now, confident that Ryan will see another Christmas and that they will celebrate his fifth birthday, but she is still guarded, and says, “You know, tomorrow is not promised for anybody, and when you have a sick kid, it’s definitely not promised.” Each day Jen is sure to give lots of extra hugs. Extra kisses. Extra fist bumps. 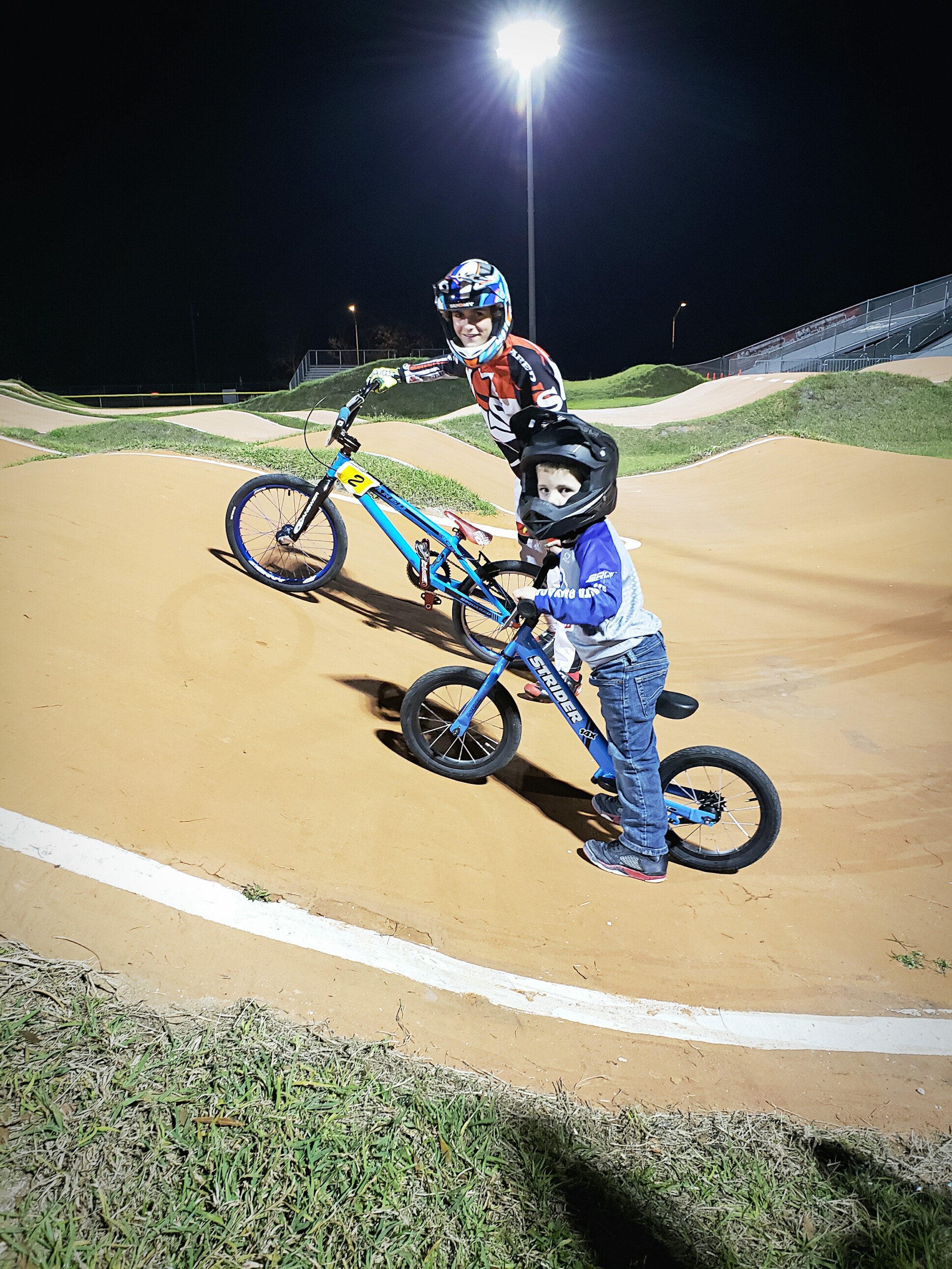 It is so much more than JUST riding a bike. On a bike at the track, a sick boy who has seen countless hospitals and had endless tests, get to be just like other kids.

Getting Ryan on a bike has been a significant experience, for both him and his family. It is so much more than JUST riding a bike. On a bike at the track, a sick boy who has seen countless hospitals and had endless tests, get to be just like other kids. The other kids give him fist bumps and high fives. On his bike, he gets to be just like everyone else. Ryan, a once shy, sick, and timid little boy, got on a bike and it changed him. “He has just blossomed,” Jen beams, “He has gained so much confidence." And Ryan is one determined kid. He wants to ride and keep riding. He’ll set a goal of doing five laps, and when he’s done with that, he wants to do more. “Riding builds confidence. It builds character. I mean, just seeing all the little Strider kids out there, it’s amazing,” Jen says with deep conviction.

Jen’s message to the Founder of Strider Bikes, Ryan McFarland, is, “NEVER second guess what you have done. Strider Bikes are the most amazing thing ever!” And her message to everyone else is, “Strider Bikes are legit. Whether your kids are special needs or not, they’ve got to get on a Strider Bike. They’re the greatest thing since sliced bread!” We couldn’t have said it better ourselves. Cheers to Ryan for his bravery and grit, and cheers to the fierce support of a mother’s love!

Jenn has launched a Go Fund Me page to help with Ryan’s medical expenses. To donate, click HERE.